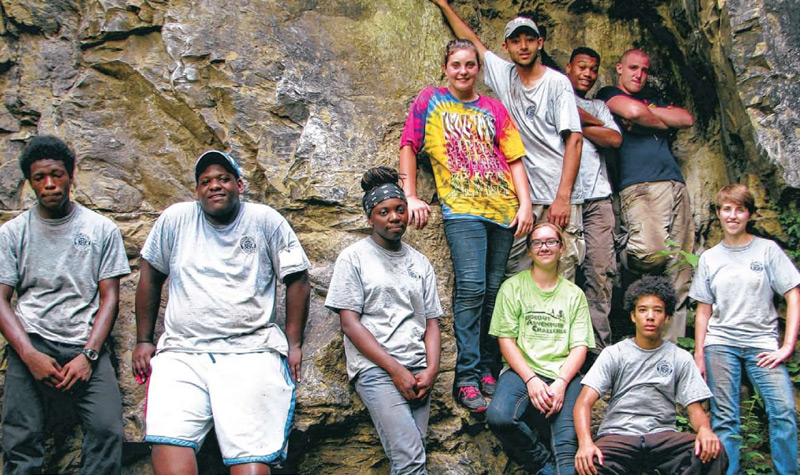 An incredible group of teenagers bring new energy to conservation work, restoring the land as well as each other.

It's one of those days on Lookout Mountain–the kind that a makes you want to pull the covers over your head and hibernate. But, in the cold, mist of a Saturday morning, five teenagers work steadily clearing brush along Old Wauhatchie Pike. What's more, they actually want to be there, laughing and joking as they rake, weed and roll logs.

“It’s really not like we’re at work,” says Derrica Hampton, 17. “Everybody standing here, we all get along. We work together because the work we do you can’t necessarily do it by yourself. It’s more like a second family.”

The close-knit team is part of The Howard program—the result of a remarkable partnership between Lookout Mountain Conservancy and Howard High School. What started as a few volunteer work-days with students who hardly knew each other’s names has morphed into more than anyone could imagine. “It’s been an incredible transformation,” says LMC CEO Robyn Carlton. “There’s been improvement in grades and disciplinary issues. I have teachers tell me that when they watch a kid walk down the hall, they can tell if they’re in our program based on the way they carry themselves.”

“The experience has taught me how to get along with people and how to build leadership. It’s helped me to build courage.”

It all started when the Conservancy applied for a grant from the Water Department to clear a ravine near John C. Wilson park at the foot of lookout. In the late 1800s it was a waterway carrying runoff into the Tennessee river, but trash and overgrowth have long since clogged it. Knowing Howard High School was looking for student volunteer opportunities, the Water department paired the organizations together. 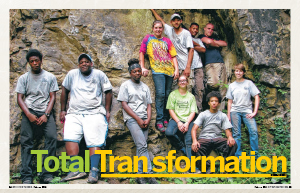 Last fall, Howard science teachers asked students if they would be willing to help LMC clear some of its land. The kids had no idea what to expect, but the field trip promised free food and a chance to miss school, so several hands went up. It was the first time most had been exposed to nature, although the majority live less than a mile from the foot of lookout. In fact, 49 out of 50 volunteers had never set foot on the other side of Broad Street.

About eight weekend workdays followed throughout the year. Students not only wrestled with kudzu roots and 80-year-old privet with trunks like trees, they excavated about 100 years worth of trash. The eco-archeologists uncovered glass Coke bottles, car parts, refrigerators, toilets and more than 600 tires.

In the late spring, students were given the opportunity to apply for paid apprenticeships. Not only was the work grueling—seven hours every day in the summer heat—the approval process was no walk in the park either. Students had to prove themselves in the field as well as in interviews. Out of 18 applicants, eight were accepted.

And while their experience working outdoors was limited, the apprentices were well versed in survival skills. “Many of these students don’t know what they’ll walk into at school or when they get home, or even where their next meal is coming from,” says Carlton. “But through this experience they’ve gone from survival mentality to having enough self-esteem and resources to ἀnd what they need.

“When we first started working together, they told me they just didn’t want anyone to count them out. Now they say, ‘Ms. Robyn, count me in.’”

In addition to working on the ravine—now about one-fifth complete—the apprentices helped spruce up the surrounding 40 acres owned by LMC. Eventually the land will become an urban wilderness park connecting the expanded downtown riverwalk to the trails of lookout mountain.

Over the summer the team members planted a community garden, cleared and burned overgrowth, cut grass, weeded and trimmed. They also restored Laney Loop, a washed-out trail with knee-deep ruts, and presented it to the LMC board member for whom it was named.

But their favorite part was scraping 16,000 bricks by hand, which came from a demolished home on the property. Not only will the brick be laid one day in “their” section of the riverwalk, but they did it alongside more than 300 kids from youth groups across the country.

More impressive than the changes they’ve made to the landscape are the seismic shifts in each student. Before working with the Conservancy, 17-year-old Arterrius Smith kept to himself. With a sometimes volatile home life he’d learned to withdraw, hardly speaking to anyone and spending most of his free time playing video games.

“The experience has taught me how to get along with people and how to build leadership,” he says. “It’s helped me to build courage.” One such opportunity came when the students were asked to work a LMC fundraising party. for weeks leading up to the event the group practiced party etiquette, including starting conversation with strangers. Smith begged Carlton not to make him do it, but his classmates encouraged him to go home and practice in the mirror. The next morning, he arrived at work and shouted across the road, “Ms. Robyn, how are you this morning?”

“I was completely blown away,” recalls Carlton. “This is a kid who you hardly knew was there all summer. I asked him what happened. he said he went home and practiced almost all night in the mirror, and he could hear my voice in the back of his head saying, ‘you can do this.’”

The eight apprentices were led by two interns, Paige Berghel and Grahm Valadie, both Girls preparatory School students who had worked with the Conservancy for several summers. Three Howard students have since graduated, with one in college and one in the U.S. Navy. The remaining have have been promoted to interns and will help lead next year’s summer program. They too have big plans for the future, including child psychologist, architect, computer programmer and professional welder.

Fifteen-year-old Umar Muhammad, who recently moved from Chicago, hopes to attend Vanderbilt University to study medicine. He’s been nominated by his teachers to attend a national conference in Washington, D.C., this February, where he’ll meet with Nobel prize winners, the president’s physician and possibly even the president himself. Even so, his work with LMC has shown him a side of Chattanooga he didn’t know existed. “I got lost trying to come up here a bunch of times,” he says. “I didn’t even know how to get from Howard to here. I’ve never been on this side of Broad Street. This side is not as wild as it is over there. Even if we didn’t work [with LMC], I’d come out here to chill out.”

And most importantly the students better understand the importance of giving back. “If you look at it from when we first started we can say, ‘Wow, we did that,’” says Sayyid Muhammad, 17, Umar’s older brother. “It’s kind of fun and enjoyable to know that you’re helping others. That’s something I always learned from my parents. This just gave me more experience with it.”

The experience has also exposed students to volunteer work outside of the project. Not long ago they helped assemble nutritional packets at Boyd-Buchannan School for their “feed my Starving Children” program. “I could do that every day,” smiles Domanique Rahman, 16. “That was one of the best experiences of my life knowing it was going off to people in other countries to feed them.”

Once complete, the students’ hard work will have an incredible impact on the landscape of our city. It will bridge urban and wilderness in a unique way, offering a gateway to myriad outdoor learning opportunities and activities. While the park is still at least have years away, the work already going into the project has clearly paid off, both in the progress of the planned trail and the path each student is laying toward their own future.

“This is the best job ever,” Domanique says. “There’s a lot you can take from it and a lot you can learn from it. most people our age think they can’t do stuff like this, but we can and we can benefit from it.”

The inaugural class of LMC’s Howard Program included eight apprentices from Howard and two interns from GPS. Five have since graduated, and five have been promoted to interns, who will lead next year’s program.